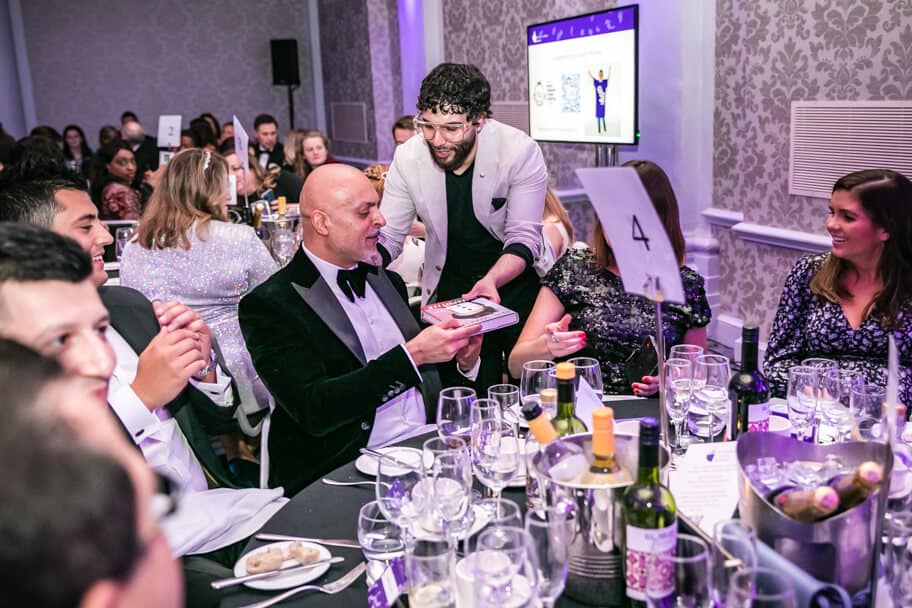 London’s magicians are widely used at awards shows. It’s a great ice-breaker and an excellent way to provide entertainment during the event. I performed as a close-up magician in London for The Business Culture Awards, at De Vere Grand Connaught Rooms. This was during the drinks reception and dinner. I also performed an online virtual magic show for guests who couldn’t attend.

The Business Culture Awards is hosted annually and give organisations that take part awards for different categories. It’s a large awards show and has over 25 different categories with nearly 100 different businesses competing to win. Some examples of these categories would be Best Digital Transformation Initiative, Best Wellbeing Initiative and Best NGO/Non-Profit Organisation. It’s also a way to celebrate the achievements they have made during the year, for both the business and its employees.

I performed my close up tricks at the drinks reception as guests were arriving, and then also performed table magic in between courses during the dinner. I was performing all sorts of different magic. From card magic to making peoples rings & phones vanish right in front of their eyes, and then ending up in an impossible location. Even turning lottery tickets into money, which was a favourite among the crowds.

As Covid fears were still about, some of the guests couldn’t attend the event. This was due to travel or as they were isolating. To ensure they didn’t miss out on their company and fellow employees receiving awards, they were invited to watch via Zoom. The Business Culture Awards set up a virtual segment so that the guests who couldn’t attend could watch from the comfort of their own homes.

I was asked to perform an online virtual close up magic show for the guests watching via zoom. This played out very well and they enjoyed the magic just as much as the guests who were there on the night. ( You can see part of my virtual magic in the video below )

Obviously, as you could imagine, performing Close-Up Magic in London through a camera is much different from performing for a real-life audience. For instance, one of the hurdles that you get would be when you perform a card trick. You can’t get someone to physically pick a card, so you have to work around this. Another hurdle would be trying to convince the audience at home that there are no camera tricks involved, as it was still all using sleight of hand.

During the lockdown we faced back in 2020, I had to adapt my business in order for it to continue. I started performing online live virtual shows across Instagram and Zoom for businesses and celebrities. I was doing this all through 2020/2021 so had plenty of experience in virtual magic.

My approach to virtual magic was simply showing the guests as much visual magic as possible.  This way they could watch the show like they were watching a magic show on TV or on stage. However, I was able to hear some of the guests on zoom so of course, I got them involved by helping me with some of the tricks.

Performing in London as a close-up magician, table magician and a London virtual magician all in one night kept me on my toes. This was as after performing during the drinks reception, I had to switch from table magic to virtual magic over 2 hours to make sure that all of the guests there were entertained, as well as the online guests.   I had a great time performing for everyone and it was well worth it seeing so many faces light up with excitement and joy. The night was a success!

If you have an upcming event in London wheater it be a wedding, corporate event, party or virtual event and you’re looking for a magician, please get in contact with the detials below. I’ll be looking forward to performing for you and your guests.